Brown and Bigelow hired Norman Rockwell, Maxfield Parrish, Cassius Marcellus ("C.M.") Coolidge and others to paint pictures for their calendars.  Coolidge (1845 - 1934) became famous for his humerous poker-playing dog prints, nine in all.  He painted 16 dogs-as-humans pictures in all for B&B, starting in 1906.  Nine, as noted, are of dogs-playing-poker, and another seven were of dogs acting as humans, but not in poker-playing scenes.  His hometown was Philadelphia NY (90 miles north of Syracuse).  He moved to various places including Bay Ridge, Brooklyn.  He died living in Staten Island NY.

The print at the lower right is not seen very often.  It is called "Stranger in Camp" (referring to the dog on the right); that print is also known as "Topped Again".  It is the only one that is situated outdooors.  The dog on right is holding a hand of 4 aces, but he loses the pot to the dog on the left, who holds a straight flush.

The print in the center is titled, "A Bold Bluff."  The other eight, going clockwise from the upper left, are:  A Friend In Need, A Waterloo, Pinched With Four Aces, His Station And Four Aces, A Stranger In Camp, Sitting Up With A Sick Friend, Post Mortem, and Poker Sympathy. 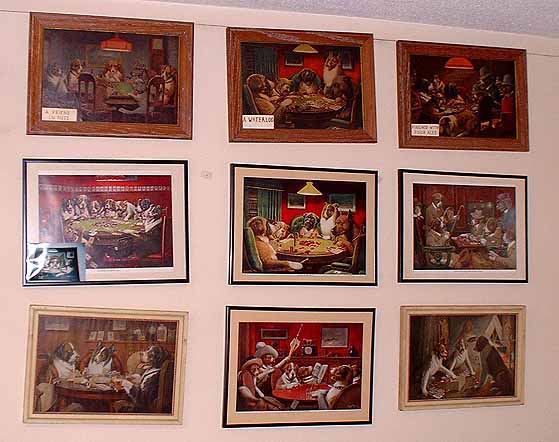 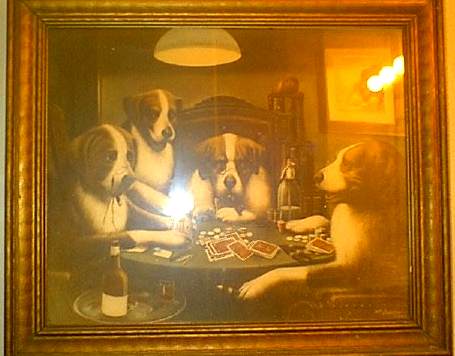