The Burt Company had distinctive edge spots (inserts -- those small colored spots near the rim/edge of the chip).  For one thing, they appeared neatly in place on the finished chip.  And for another thing, the part of the edge spot nearest the center of the chip was concave; that is, curved towards the edge so they would be parallel to the edge of the chip and the inner circles of the chip; this feature is found on all the chips they made with edge spots one half inch or wider (as seen in the upper left chip below). 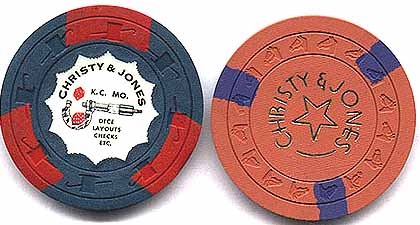 Two Christy & Jones chips are shown above with the distinctive Burt Co. edge spots. (Note: Christy & Jones used the horsehead-left mold as well as the hat & cane mold; these two scans courtesy of Jim Blanchard.)  The chip on the left has edge spots a half inch or more in width, so the inside edge of the edge spot was made curved (concave) to parallel the circular edge of the chip and the inner circles of the chip.  The chip on the right has edge spots less than a half inch wide, so the inner end was made straight (because being that small there was no point in curving it -- that is, a curved edge spot would look straight anyway on such a narrow edge spot.)  Note that these two chips have neater edge spots than in the fuzzy-line Paulson chips below.

Three typical Paulson-made hat & cane mold chips.  The edge spots are fuzzier than the Christy & Jones ones, and they are made convex (they bulge out towards the center of the chip).  Anytime you see a chip with edge spots like these (convex bulge or fuzzy, irregular lines), you know it is not a Christy & Jones chip!